Stable homotopy theory is a branch of algebraic topology where the central objects of study are not topological spaces, but something called spectra. Spectra are often more complicated to deal with than spaces, but they are very well suited to applying the techniques of homotopy theory.

Stable homotopy theory can be tricky to motivate, in part because there are lots of different sources of motivation, each requiring different background knowledge to appreciate. No single one of these is a slam-dunk reason to study spectra, but the combination of all of them makes it clear that it’s a very natural piece of mathematics. In the first half of this post I’ll give a justification for considering (Omega-)spectra that doesn’t rely on many prerequisites, but you’ll have to believe me that there are other reasons to consider them to be the right thing to look at.1

In the second part of the post I’ll describe how we use the theory of model categories to understand spectra. In particular this explains why we need to think about sequential spectra as well as Omega-spectra.

Most of these perspectives came from Urs Schreiber’s Introduction to Stable Homotopy Theory notes on the nLab (in particular the section on Sequential Spectra), and I highly recommend taking a look at these if you want to learn the technical details or read further in the subject.

Repeating this construction, we get the definition of an Omega-spectrum. 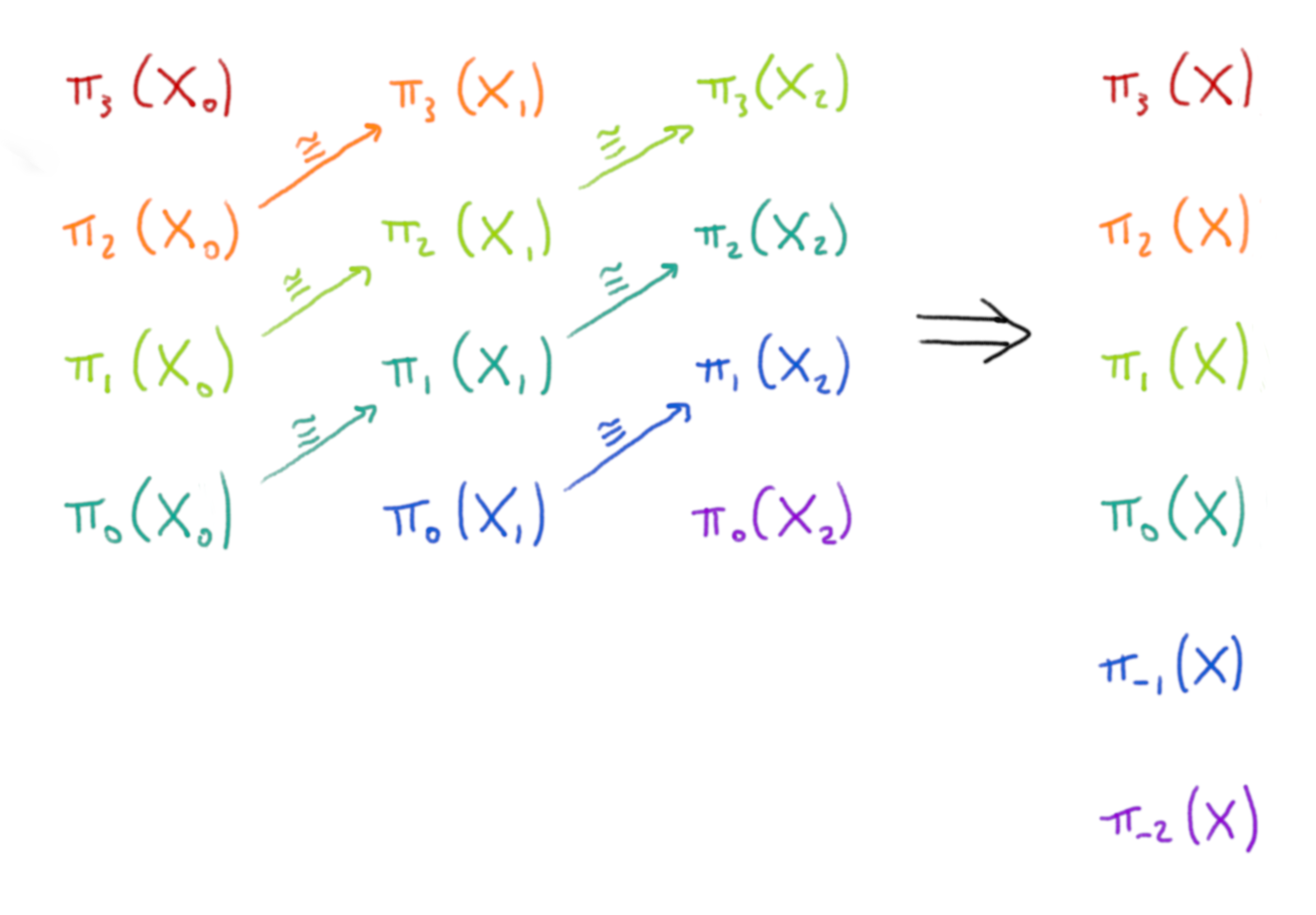 The next step is to try to do homotopy theory, replacing spaces with Omega-spectra.

What exactly do we mean by “do homotopy theory”? A truly satisfactory answer would probably involve \(\infty\)-categories, but I don’t know enough to do justice to that point of view. Instead we’ll use model categories to gain access to the homotopy theory of spectra.

The point of model categories is to take the tools we use to work with the homotopy theory of spaces, and abstract them so that they can be applied to other scenarios. A model category is a complete and cocomplete category with three specified classes of morphisms called weak equivalences, fibrations and cofibrations (analagous to weak homotopy equivalences of spaces, Serre fibrations and retracts of relative cell complexes). These classes must satisfy certain factorisation and lifting properties. It turns out that this is enough to define a notion of homotopy of maps, and to prove a version of the Whitehead theorem.

Instead we will need to work inside a larger category that is complete and cocomplete. Let’s take a step back. An Omega-spectrum consists of a collection of spaces and maps, satisfying some properties (certain maps are weak homotopy equivalences). Perhaps it would be useful to first study the structure without the properties; to borrow language from programming, we look at the underlying “datatype”. This gives the notion of a sequential spectrum.

This time we do get a complete and cocomplete category (limits and colimits can both be computed objectwise). Even better, it turns out there’s a natural model structure on \(\text{SeqSpec}\), known as the strict model structure on sequential spectra5.